Remember the days in the Intensive Care Unit (ICU) when giving patient Mucomyst to help break up that thick , yucky, stuff?  Or working in the emergency room (ER) and maybe the night shift receives an aecatminophen overdose.  They would pull out the Mucomyst and give the patient some orally to help protect the liver.

USES: can be give by inhalation, acetylcysteine is used to help thin and loosen mucus in the airways due to certain lung diseases (such as emphysema, bronchitis, cystic fibrosis, pneumonia). This effect helps you to clear the mucus from your lungs so that you can breath easier.
May also be given by mouth (orally), used to prevent liver damage from acetaminophen overdose.
Working in the Emergency room (ER), nurses must be familiar with intravenous medications. One medication that stands out is intravenous (IV) Acetadote.  This medication is also given orally for acetaminophen overdose as well; however, oral medications can take longer to take effect and often these patients may not have the time. 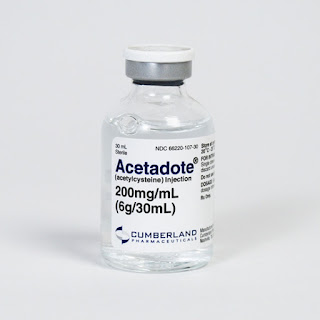 According to the data provided by the American Association of Poison Control Centers (AAPCC), acetaminophen was involved in more than 187,000 poisoning exposures in the United States in 2009, including more than 100,000 cases of acetaminophen in combination with other medications.2

Patients who may have had a previous anaphylactic reaction to acetylcysteine should avoid this medication.

Acetadote should be used with caution in patients with asthma or where there is a history of bronchospasm.

Intravenous Acetadote, should be administered intravenously within 8 to 10 hours after the known ingestion of a potentially hepatotoxic quantity of acetaminophen.  This treatment is indicated to prevent or lessen the injury to the patients liver.
For best results it is important to administer the first intravenous dose within 8 hours.  The longer the time frame from ingestion the less likely the treatment will work effectively.

Acetadote should be used with extreme caution in patients who may suffer from asthma, COPD, or where there is a history of bronchospasm. "In the literature, the most frequently reported adverse reactions attributed to IV acetylcysteine administration were rash, urticaria and pruritus. The frequency of adverse reactions has been reported to be between 0.2% and 20.8%, and they most commonly occur during the initial loading dose of acetylcysteine."2