Nurses have long been charged with caring for patients in different settings.  Some work in the ICU, ER, LTC, or even doctors’ offices.  What is so puzzling is that some nurses seem to fail to realize that no matter what setting they are in; a patient is still a patient.  Standard procedures, tasks, skills, and critical thinking do not change much from area to area. 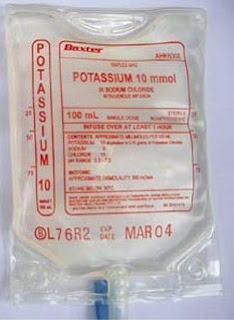 Granted there are more advanced skill sets and the need for higher critical thinking in the specialty areas; however, if the nurse will remember the “5 Medication Administration Rights.” As well as the fact that every patient may at some point need the nurse to perform life saving skills such as cardiopulmonary resuscitation (CPR).
Rule #1:  DON’T PANIC
If you Panic you will forget everything that you have learned and the patient will suffer.
A senior investigator with the Department of Consumer Affairs testified at a hearing on a complaint that the board of registered nursing received in regards to a patient injured by a nurse who was performing a task related to infusion therapy.
Patient A
Patient A was admitted to the ICU with a diagnosis of hypokalemia, (low potassium) with a serum potassium level of 3.0 mmol/L.  A normal serum potassium level is typically between 3.5 to 4.5 mmol/L.   On December 19, 2007, at 6:39 a.m., Patient A's physician ordered four doses of  intravenous (IV) potassium supplementation which was to be administered over one hour increments starting at 7:30 a.m.  The nurse caring for Patient A was aware of the physician's order of Potassium Supplementation; however, the healthcare provider did not administer the IV medication to Patient A's until 11:10AM.  This is almost four hours later.
At approximately 10:30 a.m.; the PYXIS system used by the nurse and hospital system had flagged Patient A's MAR because the Potassium Supplementation had not been administered on time.  When asked why the medication was not given, the nurse stated that the medication was not yet available and he had not contacted the pharmacy.   The nurse also informed his supervisor that he checked for the Potassium in the refrigerator; however, it was not available.   The nurse then went on to tell a DPH surveyor he was going to wait to administer the dose because the peripherally inserted central catheter line (PICC line) had not been inserted and that he was aware that Potassium Supplementation was an important medication, but did not believe that the medication was an emergency, nor was it necessary to rush since the doctor did not write in his order; “give stat.”  The nurse went on to state that another reason the infusion was not started was due to the fact that the patient’s peripheral intravenous catheter (PIV) had infiltrated causing an extravasation.
The issues here are too many to count.  However, the important questions to ask in this type of situation are:
Caring for patients is a noble and courageous undertaking.  On the other hand the nurse should use critical thinking skills as well as common sense in order to protect the patient.  To learn more about this case and others visit us here at Central Valley Medical as well as the BRN.

As used in Section 2761 of the code, 'gross negligence' ·includes an extreme departure from the standard of care which, under similar circumstances, would have ordinarily been exercised by a competent registered nurse. Such an extreme departure means the repeated failure to provide nursing care as required or failure to provide care or to exercise ordinary precaution in a single situation which the nurse knew, or should have known,cou1d have jeopardized the client's health or life...'
Posted by Unknown at 11:10 AM
Labels: iv certification, iv therapy training, vascular access