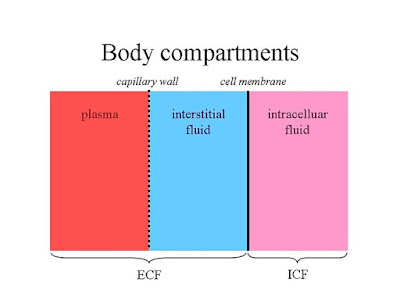 Figure 1.1
When assessing the patient the healthcare provider should use their critical thinking skills to determine the fluid needs of the patient; which fluid compartments are or will be affected, and what types of fluids would best be ordered to help achieve an optimal fluid distribution. Distribution of fluids will depend on the solute order and the concentration of said solute.
The human body’s serum osmolarity typically ranges from 285-295 in order to maintain homeostasis in these fluid compartments. The healthcare provider should assess the osmolarity of the crystalloids or colloids in order to help determine where and how they want to move the fluids from one compartment to another.
Crystalloids and Colloids
There has been a lot of debate over this particular issue in the healthcare setting for quite some time.
Why choose a crystalloid or a colloid or vice versa. “A critical review of the experimental and clinical studies comparing crystalloid versus colloid resuscitation essentially shows no physiologic difference in the two solutions.”
(Tranbaugh, & Lewis, 1983)
So, to answer our previous question; why a colloid versus a crystalloid; is not an easy one. The physician may choose to select a colloid for patients who are already deemed to be in pulmonary edema or have some type of cardiac issue that may hinder an effect fluid exchange at the capillary level. By given colloids the healthcare provider can limit the fluid intake; yet still achieve fluid resuscitation. On the flip side if the patient has not yet gone into full blown pulmonary edema and has good kidney function the provider may opt for the crystalloid as this is less expensive and research has determined that neither has an advantage over the other; except cost. Crystalloids are less expensive than colloids; so the healthcare provider should outweigh the benefits versus the risk as well as a simple cost analysis.
In order to be effective in managing the redistribution of fluids the healthcare provider must understand what types of fluids are either crystalloids and or colloids and how that may affect the movement of fluids across the different compartment membranes.
Before selecting a colloid versus a crystalloid the healthcare provider must paint an overall picture of the patient’s condition and underlying disease process.
Crystalloids

According to the Tabers Medical Dictionary a Crystalloid is a solution in which crystals can or may form; but is able to diffuse across cellular membranes. Crystalloids are the most common fluids used in the healthcare setting. The following are some examples of the most common solutions in the crystalloid category. 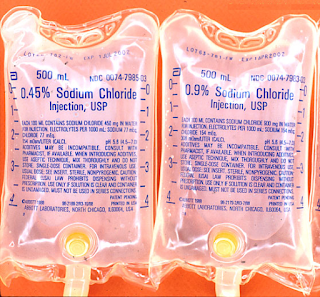 Normal Saline
Lactate Ringers
Dextrose 5%
Normal Saline
Normal Saline is composed of 154 milliequivalents (mEq/L) of Sodium and 154 milliequivalents of Chloride. The ph is 6.0 and the osmolarity is approximately 308. Normal saline is the main solution of choice when administering a blood product. (Raoof, George, Saleh, & Sung, 2008)
Lactate Ringers
Lactated Ringers is composed of 130 milliequivalents of Sodium, 4mEq of Potassium, 109 mEq’s of Chloride, and 28mEq’s of Lactate. The ph is approximately 5.1 and the osmolarity is approximately 273. (Raoof, George, Saleh, & Sung, 2008)
Dextrose 5%
Dextrose 5% is composed of 140 mEq’s of Sodium 5 mEq’s of Potassium, 98 mEq’s of Chloride, and 50 grams of Dextrose. The ph is 4.0 and the osmolarity is around 252. (Raoof, George, Saleh, & Sung, 2008)
Colloids
Again, according to Tabers Medical Dictionary a colloid is a “glue-like substance, such as a protein or starch… or a substance used as a plasma expander in place of blood.” (Wilbur, 2009) The following are some examples of colloid solutions.

Albumin
Albumin is produced in a couple of varieties; typically 5% and 25%. Albumin “is made from pooled human plasma, which undergoes ethanol fractionation, ultrafiltration, and pasteurization.” (Raoof, George, Saleh, & Sung, 2008) Albumin 5% contains no preservative and is a clear, slightly viscous liquid; it is almost colorless or slightly yellow tint. (FDA.gov, 2006) It is mainly used to expand the intravascular volume whereas Albumin 25% is typically used for hypoproteinemia. Albumin 5% is composed of 154 mEq’s of Sodium and 50 grams of Albumin and has a ph level of 6.6 as well as an osmolarity of 290. 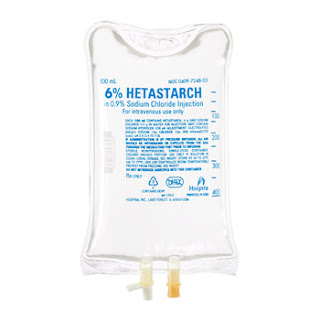 Hetastarch is another type of plasma expander and is similar in properties to Albumin. If given; it can sometimes cause an increase in the serum Amylase; which may throw healthcare professionals for a loop into thinking the patient may be suffering from pancreatitis. Hetastarch is composed of 154 mEq’s of Sodium with a ph level of 5.5 as well as an osmolarity of 310.

Crystalloids versus Colloids
So, what is the best choice for fluid resuscitation? Crystalloids or Colloids? The problem is it takes a larger amount of crystalloids to resuscitate a patient fully; on the other hand it only takes a small amount of colloids. Colloids however are more expensive and can expand the intravascular space fairly rapidly. Depending on what the patient’s medical condition is and the end goal of the fluid resuscitation will depend on whether the healthcare provider administers a crystalloid or colloid. For example if a patient arrives to the emergency room or ICU and as in hypovolemic shock; the goal of fluid replacement would most likely be attained by administering a crystalloid. On the other hand if the patient is septic and has been diagnosed with septic shock the provider may give a colloid or crystalloid.


In a normal healthy patient the body’s blood volume is typically 70ml/kg or 4.9 liters for a patient who weighs 70kg. There are many methods to monitor and asses a patient’s fluid status; however it is difficult to pinpoint the exact amount of fluid loss. Healthcare providers may choose to perform a venipuncture and obtain a serum osmolarity or the physician may opt to insert a central line a monitor the patients central venous pressure (CVP) otherwise known as right atrium pressure. In a normal healthy adult; the CVP should normally range from 6 to 8 cm of water. The lower the CVP the more dehydrated the patient may be; whereas the higher the CVP the patient will most likely present with fluid overload. If the healthcare provider is using the serum osmolarity to judge the fluid status one must first remember that early we stated the normal range usually falls between 285-295 mOsm/kg. The higher the serum osmolarity the more dehydrated the patient may present; whereas the higher the serum osmolarity the more likely the patient will present with symptoms of fluid overload. Another option that healthcare providers have at their disposal is the complete blood count (CBC). The provider may assess the hematocrit. If the patient presents with a hematocrit greater than 45 they may also be suffering from fluid overload.