Needleless devices are used for connecting to IV catheters, administration sets, and/or syringes.  They were introduced in the 1990s for the purpose of reducing the risk of needlestick injuries among health care providers.   However, in 2000 the Needlestick Safety and Prevention Act mandated that all employers provider these devices as they have shown to reduce needlestick injuries significantly.  On the other hand; their use has been associated with an increase in complications such as catheter-related bloodstream infection (CRBSI) and catheter lumen occlusion. The reason for these complications are not totally understand and efforts to study their design, user knowledge, poor clinical practices have gotten underway to help reduce or eliminate these complications. 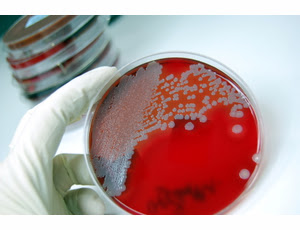 The Food and Drug Administration is requiring nine companies to conduct a post market study on positive displacement needleless connectors to determine whether they may be associated with a higher rate of device-associated bloodstream infections (BSI) than other types of needleless connectors, and to assess the factors that may contribute to a possible increased risk.  "As of today, there have been five companies to recall their products leaving four left to decide to remake or stop production on their products."4

FDA has become aware of information that raises concerns about the safety of positive displacement needleless connectors. These devices are intended for use as an accessory to an intravascular administration set to allow delivery of a wide range of fluids to a patient's vascular system through a cannula inserted into a vein or artery. Needleless connectors are known in the nursing worlds as “injection ports” or “claves.” “Positive displacement” refers to the positive pressure of fluid movement from a reservoir into the lumen of the catheter upon disconnection of an administration set or syringe. 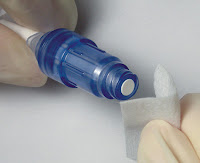 “In 2011 a survey sent to 4,000 health care workers in clinical practice found that 132 (25.4%) of the 554 respondents did not know the specific type of needleless connector they used with short peripheral catheters and 114 (21.9%) did not know the type they used with central venous catheters, and nearly half of respondents didn't understand the correct way to flush and clamp a catheter with a needleless connector attached, even though it's essential to device performance. Self-reported practices are not the best methods by which to assess clinical practices, but no other data regarding these practices exist.”
While we cannot determine what the level of risk associated with each type of needleless connector based on available evidence, we know we can significantly reduce the known complications of infection and catheter lumen occlusion by educating our nursing staff and developing competencies that will increase our skills to use these needless connectors safely. Healthcare facilities need to establish policies and procedures that will educate and guide nursing staff on the risk, of not using these devices correctly and how it may affect patient outcomes.