What Frequency Should You Change IV Administration Sets 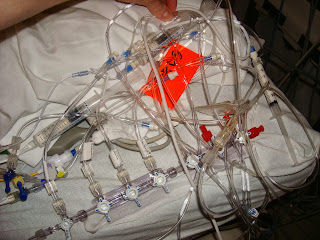 The optimal interval for routine replacement of IV administration sets has been examined in a number of well-controlled studies and meta-analyses. Data from these studies reveal that replacing administration sets no more frequently than 72–96 hours after initiation of use is safe and cost-effective [141, 177, 179–181]. More recent studies suggest that administration sets may be used safely for up to 7 days if used in conjunction with antiseptic catheters or if fluids that enhance microbial growth (e.g., parenteral nutrition or blood) have not been used [216, 345]. When a fluid that enhances microbial growth is infused (e.g., fat emulsions and blood products), more frequent changes of administration sets are indicated as these products have been identified as independent risk factors for CRBSI [182, 216, 346–350]. Little data exist regarding the length of time a needle used to access implanted ports can remain in place and the risk of CRBSI. While some centers have left them in place for several weeks without CRBSI, [351], this practice has not been adequately studied. 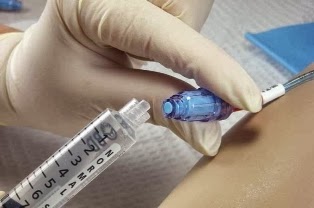 Stopcocks used for injection of medications, administration of IV infusions, and collection of blood samples represent a potential portal of entry for microorganisms into vascular access catheters and IV fluids. Whether such contamination is a substantial entry point of microorganisms that cause CRBSI has not been demonstrated. Nonetheless, stopcocks should be capped when not being used. In general, closed catheter access systems are associated with fewer CRBSIs than open systems and should be used preferentially [352].
"Piggyback" systems (secondary intermittent infusions delivered through a port on a primary infusion set) are used as an alternative to stopcocks. However, they also pose a risk for contamination of the intravascular fluid if the device entering the rubber membrane of an injection port is exposed to air or if it comes into direct contact with nonsterile tape used to fix the needle to the port. Modified piggyback systems have the potential to prevent contamination at these sites [353].
Attempts to reduce the incidence of sharps injuries and the resultant risk for transmission of bloodborne infections to healthcare personnel have led to the introduction and mandating of needleless infusion systems. There are several types of needleless connectors on the market.
The first type of needleless system connectors consisted of a split septum connector, which is accessed with a blunt cannula instead of a needle (external cannulae activated split septums). Because of the large amount of space in the connector to accommodate the cannula, when the cannula is removed it may result in the creation of negative pressure which may cause blood to be aspirated into the distal lumen, possibly increasing the risk of catheter occlusion or thrombosis. A luer-activated device, which incorporates a valve preventing the outflow of fluid through the connector, was designed to eliminate this problem. Some luer devices require a cap to be attached to the valve when not in use, which can be difficult to maintain aseptically, and therefore they may be prone to contamination. 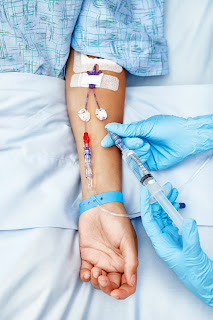 Another type of second-generation needleless system addressed the occlusion issue by incorporating positive or neutral fluid displacement to either flush out aspirated blood or prevent its aspiration into infusion catheters.
Use of needleless connectors or mechanical valves appear to be effective in reducing connector colonization in some [196, 354, 355], but not all studies [356] when compared with stopcocks and caps. In one study [354], the incidence of CRBSI was reduced when the needleless connector was compared with standard stopcocks. Appropriate disinfectants must be used to prevent transmission of microbes through connectors [357]. Some studies have shown that disinfection of the devices with chlorhexidine/alcohol solutions appears to be most effective in reducing colonization [195, 196]. In addition, the time spent applying the disinfectant may be important. One study found that swiping the luer-activated device with 70% alcohol for only 3 to 5 seconds did not adequately disinfect the septal surface [358]. However, a number of outbreak investigations have reported increases in CRBSIs associated with a switch from external cannulae activated split septum needleless devices to mechanical valve devices [197, 198, 200, 359]. The reasons for these associations are not known and it is also not known if this is a device-specific or class association, particularly as physical and mechanical properties of needleless connectors vary from device to device. In addition, one investigation found CRBSIs increased with the switch from a luer-activated negative displacement mechanical valve to a luer-activated positive fluid displacement mechanical valve [199]. However in an observational study, a switch from a luer-activated negative displacement mechanical valve to a different luer-activated positive displacement mechanical valve as part of a bundled intervention resulted in a significant decrease in CRBSIs [201]. Potential explanations for outbreaks associated with these devices include difficulty encountered in adequate disinfection of the surface of the connector due to physical characteristics of the plastic housing diaphragm interface, fluid flow properties (laminar vs. turbulent), internal surface area, potential fluid dead space, inadequate flushing of the device due to poor visualization of the fluid flow pathway in opaque devices, and the presence of internal corrugations that could harbor organisms, particularly if the catheters are used to withdraw blood [199]. Some studies have shown that the increase in CRBSIs with the change to lueractivated devices may be related to improper cleaning and infection control practices such as infrequently changing the devices [192, 194]. Additionally, silver-coated connector valves have been FDA approved; however, there are no published randomized trials with this device and no recommendation can be made regarding its use. Likewise, an antiseptic-barrier cap for needleless connectors has been studied in a laboratory setting and appears to be effective in preventing the entry of microorganisms [360], but has not yet been studied in a clinical trial.
Read more here..........
References
Download the 2011 CDC  Guidelines here...
Download Free E-Book Here

Retraction Notice--It was brought to our attention that this article had been published with an error and as such we have retracted the original article and replaced it with this article that has the current and up to date information.  If you would like a copy of the previous article with the errors to compare, please contact us at info@central-valley-med.com

Infusion Therapy is an awesome wonder when it comes to saving a patient’s life.  Is it really necessary to give a patient a Colloid versus a Crystalloid?


Trauma burns or surgery can cause people to lose large amounts of blood. Fluid replacement, giving fluids intravenously (into a vein) to replace lost blood, is used to try to maintain blood pressure and reduce the risk of dying. Blood products, non-blood products or combinations are used, including colloid or crystalloid solutions. Colloids are increasingly used but they are more expensive than crystalloids and there are many scientific studies that show no evidence colloids reduce the risk of dying compared with crystalloids. 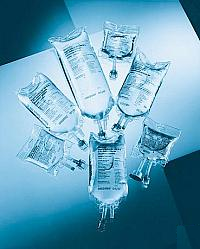 
Fluid resuscitation for hypovolemia and other medical issues is common practice in the medical management of critically ill patients, whether as a result of trauma, burns, major surgery, dehydration, or sepsis.


Colloids have been widely used all over the country for quite some time and volume replacement with colloids is considerably more expensive than with crystalloids.


In the early 1860's, it was the investigation by Thomas Graham’s that led him to classify substances as crystalloids or colloids based on their ability to diffuse through a parchment membrane. Crystalloids passed readily through the membrane, whereas colloids did not. Intravenous fluids are similarly classified based on their ability to pass through barriers separating body fluid compartments, particularly the one between intravascular and extravascular (interstitial) fluid compartments.

According to the Tabers Medical Dictionary, a Crystalloid is a solution in which crystals can or may form; but is able to diffuse across cellular membranes. Crystalloids are the most common fluids used in the healthcare setting. The following are some examples of the most common solutions in the crystalloid category.

Normal Saline is composed of 154 milliequivalents (mEq/L) of Sodium and 154 milliequivalents of Chloride. The ph is 6.0 and the osmolarity is approximately 308. Normal saline is the main solution of choice when administering a blood product. (Raoof, George, Saleh, & Sung, 2008)

Lactated Ringers is composed of 130 milliequivalents of Sodium, 4mEq of Potassium, 109 mEq’s of Chloride, and 28mEq’s of Lactate. The ph is approximately 5.1 and the osmolarity is approximately 273. (Raoof, George, Saleh, & Sung, 2008)

Dextrose 5% is consists of 278 mmoL/L of dextrose. The pH is 4.0 and the osmolarity is around 272. D5W is considered an isotonic solution in the bag, but once administered the glucose is metabolized and the tonicity of the infused solution decreases in proportion to the osmolarity or tonicity of the non-dextrose components (electrolytes) within the water.

Again, according to Tabers Medical Dictionary a colloid is a “glue-like substance, such as a protein or starch… or a substance used as a plasma expander in place of blood.” (Wilbur, 2009) The following are some examples of colloid solutions.

Albumin is produced in a couple of varieties; typically 5% and 25%. Albumin “is made from pooled human plasma, which undergoes ethanol fractionation, ultra filtration, and pasteurization.” 20


Albumin 5% contains no preservative and is a clear, slightly viscous liquid; it is almost colorless or slightly yellow tint. 7It is mainly used to expand the intravascular volume whereas Albumin 25% is typically used for hypoproteinemia. Albumin 5% is composed of 154 mEq’s of Sodium and 50 grams of Albumin and has a ph level of 6.6 as well as an osmolarity of 290.

Hetastarch is another type of plasma expander and is similar in properties to Albumin. If given; it can sometimes cause an increase in the serum Amylase; which may throw healthcare professionals for a loop into thinking the patient may be suffering from pancreatitis. Hetastarch is composed of 154 mEq’s of Sodium with a ph level of 5.5 as well as an osmolarity of 310.

So, what is the best choice for fluid resuscitation?  The problem is it takes a larger amount of crystalloids to resuscitate a patient fully; on the other hand it only takes a small amount of colloids. Colloids however are more expensive and can expand the intravascular space fairly rapidly. Depending on what the patient’s medical condition is and the end goal of the fluid resuscitation will depend on whether the healthcare provider administers a crystalloid or colloid. For example if a patient arrives to the emergency room or ICU and as in hypovolemic shock; the goal of fluid replacement would most likely be attained by administering a crystalloid. On the other hand if the patient is septic and has been diagnosed with septic shock the provider may give a colloid or crystalloid.


There is no evidence from randomized controlled trials that resuscitation with colloids reduces the risk of patient death, compared to the resuscitation with crystalloids, in patients with trauma, burns or following surgery. So this could help us conclude that the use of colloids may not only increase mortality; but they are also not associated with an improvement in survival and are considerably more expensive than crystalloids, it is hard to see how their continued use in clinical practice can be justified.