Hospital To Nurses: It's Your Problem; Not Our Problem 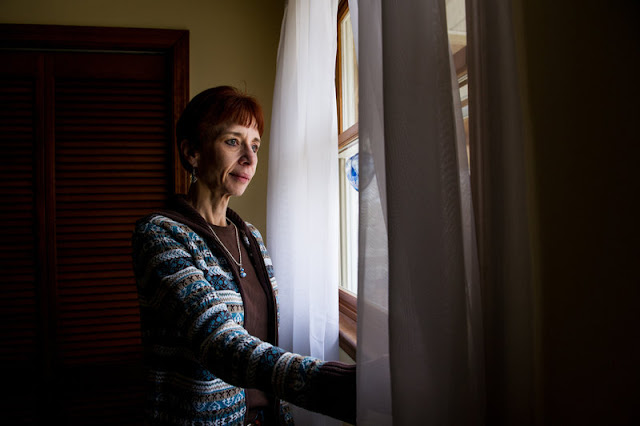 For years I have been teaching and talking about liability and disability insurance for nurses.  I explain that if you get hurt on the job; most if not all hospitals make it difficult for you to get the help you need as a nurse.  Even if you get on some type of disability; the amount of money you will receive maybe only be around 50-60% of your normal income if you are lucky.  The story below taken from NPR is a great example of how nurses can e lost in the crack and not helped even when simply doing their job.

Daniel presents the case of Terry Cawthorn and Mission Hospital, in Asheville, N.C., which provides a look into how some hospital officials around the country have shrugged off an epidemic.
"Cawthorn was a nurse at Mission for more than 20 years. Her supervisor testified under oath that she was "one of my most reliable employees."   Then, as with other nurses described this month in the NPR investigative series Injured Nurses, a back injury derailed Cawthorn's career. Nursing employees suffer more debilitating back and other body injuries than almost any other occupation, and most of those injuries are caused by lifting and moving patients.   But in Cawthorn's case, administrators at Mission Hospital refused to acknowledge her injuries were caused on the job. In fact, court records, internal hospital documents and interviews with former hospital medical staff suggest that hospital officials often refused to acknowledge that the everyday work of nursing employees frequently injures them. And Mission is not unique. NPR found similar attitudes toward nurses in hospitals around the country.  Documents from Cawthorn's court case tell her story.
It was in the afternoon on her 45th birthday. A large patient had just had a cesarean section, and Cawthorn was helping move her from the gurney onto her bed — a task that nursing employees perform thousands of times every day."  She kind of had one cheek on the bed, one cheek on the stretcher, and we [were] trying to help her," Cawthorn says. To demonstrate, Cawthorn bends her knees and crouches, keeping her back straight. She extends her arms like railings, as though she's holding them out for the patient to grip."  And the second she grabbed on, almost instantaneously I felt like hot tar was just going down my spine, into my butt," Cawthorn says.
By the time she left work that day, she could hardly walk — or drive. Her husband had to lift her out of her car and carry her into their home, and lay her on the floor. Cawthorn could see the birthday flowers and pink cake her family had made on the dining table. "And I'm just on the floor, in tears," says Cawthorn, "in so much pain."
Cawthorn took painkillers and made it back to work the next morning, and reported the injury to her supervisor. Then she hurt her back again barely a week later when she lifted another patient. She injured her back a third time a few days after that. And nine months later, Cawthorn herself became the patient in the hospital where she worked: She had a "lumbar interbody fusion," an operation in which the surgeon built a metal cage around her spine."

"As nurses most if not all of us are covered by State laws that require companies to cover employees' medical bills when they are injured doing their jobs. Companies also have to pay workers' compensation to support injured employees while they're missing work — and missing their paychecks.
But officials at Mission refused to help Cawthorn. According to court documents, the hospital's own medical staff concluded that she was hurt moving patients. But the hospital's lawyer disagreed, arguing that Cawthorn actually hurt her back partly while lifting a dinner casserole out of her oven.
Mission hospital officials also said that as a result of Cawthorn's back injury she was no longer fit to work. Cawthorn and her husband say she was lying in her hospital bed two days after back surgery, when a hospital representative walked into her room and handed her a document. It announced that Mission was terminating her job."  They actually saved themselves the postage," Cawthorn says, looking as if she's about to cry. "And I was so emotionally destroyed. Nursing's not just a job. It's who you are."   As Cawthorn and her husband, Tucker, talk about her painful saga, they're sitting at home in a small town about a 30-minute drive from Asheville. The refrigerator is covered with photos of their family, which show a dramatically different Cawthorn than the woman sitting now at her dining table."
Read more Here............
About This Story

This is the third in a series of stories written by Daniel  Zwerdling about the dangers of nursing.

Posted by Central Valley Medical at 12:07 PM No comments: Links to this post 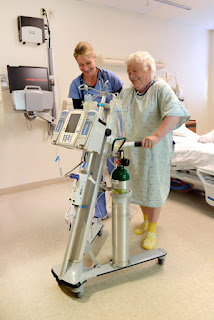 With all of the advancements in infusion technology during the last hundred years, it’s simply astonishing that the IV pole has remained essentially unchanged in design and function during all that time. Top heavy, “tippy”, noisy, awkward, inefficient, for generations the IV pole has been widely viewed as a challenge rather than asset—something to deal with rather than something that actually improves the quality of care.Finally, however, there’s an alternative. The IVEA is transformative patient-care equipment designed by nurses for nurses to improve mobility, safety, efficiency and storability. The IVEA replaces the IV pole bedside and supports the patient during ambulation. It holds all of the patient’s equipment, including infusion bags and pumps, PCAs, oxygen, chest tubes and catheter bag on a stable platform, and moves easily and securely, promoting early and frequent patient mobility.The IVEA’s award-winning design is also unique in that it folds and stores easily, reducing clutter in rooms and hallways. This equipment is the brainchild of a former RN, and more than 150 clinicians weighed in on its design. The final result is a piece of equipment that is lightweight yet durable, nimble yet secure—equipment that promises to improve efficiency by eliminating the need to transfer equipment from one device to another and making it possible for one nurse, rather than two or three, to safely ambulate a patient.The advent of the IVEA couldn’t have happened at a more opportune time. As hospitals experience radical change in healthcare economics, the IVEA offers a means to help improve caregiver efficiency, reduce lengths of stay and improve patient outcomes, thereby improving the bottom line. In light of recent reports on the prevalence of nurse injury and OSHA’s new guidelines for safety enforcement, hospitals are looking for a tool such as the IVEA, specifically designed to improve mobility with less risk of injury for patients and nurses. And with the pronounced shift to more consumer-oriented care, the IVEA’s sleek design has the potential to improve patient satisfaction scores and help hospitals meet the challenges of a more competitive market.The response from nurses seeing the IVEA for the first time is often, “Wow. I wish I’d thought of that.” In truth, they did. Without extensive clinician input, the IVEA wouldn’t be the product it is: a patient-mobility solution designed to meet the challenges of modern care and finally consign the antiquated IV pole to history.Learn more about the IVEA at www.iveamobility.com and watch the video.(video link: https://youtu.be/9uI7DHhv0Jc)
Posted by Central Valley Medical at 4:38 PM No comments: Links to this post
Labels: association for vascular access, extravasation, iv certification, IV Therapy, IV Therapy complications, vascular access
Newer Posts Older Posts Home
Subscribe to: Posts (Atom)